ABOUT US, Cinema Salem

Cinema Salem is an independent three-screen movie theater in Salem, Mass.
Cinema Salem first opened in 2006. Prior to that, a succession of other cinemas occupied the same space. Many North Shore folks recall seeing movies here over the years -- from blockbusters to arthouse fare to cheapo dollar-a-ticket shows.
In March 2020 Cinema Salem closed its doors amid the COVID-19 pandemic. Fourteen months later, the cinema repoened on Friday, June 4 under new leadership with a new vision. We’re delighted to get back to showing the kind of movies you've always enjoyed here. We'll also be presenting exciting discoveries from cinema's rich history and more recent gems off the beaten path. In addition, we look forward to an expanded menu of live performances and events as COVID concerns ease.
And speaking of COVID, we are continuing precautions for the time being. Find details on our COVID protocols page.

Shanna managed Cinema Salem for a number of years prior to its 2020 closing. Fortunately, she returned after the hiatus to make sure the cinema's many moving parts keep moving. For that — and for her creativity and her cheerful personality and her attention to detail and her guidance on how to deal with Hollywood studios and much, much more — we are grateful. And for her general weirdness.

When asked for a brief bio, Shanna responded with this: "Shanna was once considered to be an infant, but over time she proved them wrong. When she was 6, she rode a ferris wheel but never came down. Seventeen months later she emerged from a sewer fully grown and spoke in a language that no one could decipher, not even herself. We don't speak of those times. After being blessed by a priest at Coachella she was able to move forward with her studies which she now finds completely useless. Shanna enjoys the darkness the Cinema provides and snacks."

We have nothing to add.

Peter started working at Cinema Salem when it first opened in 2006, and he's been around ever since. Peter grew up in this area and saw movies here when the place was part of the Patriot Cinemas chain. After studying film in college, he was happy to land a job at his old haunt and worked his way up to general manager. We're grateful he remains with us.
Peter studied film at Keene State College and has pursued interests in screenwriting and production. He now serves on the selection committee for Salem Film Fest.

John is the founder of Creative Collective, Creative North Shore, and John Andrews Photography. A leader in innovative approaches to economic development, John is a community treasure. The Essex Media Group named him 2020 Person of the Year, recognizing his tireless efforts supporting and connecting the creative workforce and small businesses during the pandemic.
John is no stranger to Cinema Salem. He has produced and programmed dozens of live performances in the space and supported many film festivals and specialty programs. Going forward, he will continue working to grow the cinema into an asset for the creative community, and to expand the connections and collaborations with local artists, makers, culture leaders, festivals, and organizations, furthering the cinema’s vision of transforming the space into a place of belonging for all.

Marshall and Elaine have lived in Salem since 2001, arriving from Washington DC and many points beyond. Admitted rookies in the cinema business, they bring business and creative experience in an array of other fields. They also confess a love of learning curves and the desire to sustain and expand a beloved community asset.
Before becoming a cinema mogul, Marshall spent his working years in the worlds of nonprofits, politics, and human rights advocacy (find details here). Until stepping down in early 2020, he was CEO of the Workplace Giving Alliance, a Salem-based nonprofit that helps the U.S. government administer its employee workplace fund drive. He remains involved as board chair. He also serves on The Salem Pantry board as treasurer. He is a former board member and chair of Plummer Youth Promise and a former board member and treasurer of Historic Salem. Earlier professional activities included nonprofit fundraising, political speechwriting, and trying to bring democracy to China and Russia. (Some of these efforts have been more successful than others.) Along the way, he organized a 1991 Congressional human rights delegation to China led by Nancy Pelosi. He also was CEO of an organization that produced 20 human rights documentaries broadcast nationwide in Russia in the 1990s.
Elaine worked with Marshall at the Workplace Giving Alliance for five years. Her earlier professional life included web content management, corporate communications for a DC beltway bandit, church organ gigs, piano teaching, arts journalism, freelance editing, children’s-opera and musical-theater writing (words, not music), theatrical musical direction, consulting for the New York State Council on the Arts, and playing keyboard with a South Texas bar mitzvah band. Lately her musical interests have skewed more toward the classical, but she still loves rock and roll.

On behalf of Cinema Salem, Elaine reached out to Richard Guérin, who produces live concerts and recorded music locally, nationally and internationally. Together they launched our Cinema Sounds series.  Every month, with their help, we explore the musical side of great films.

Cinema Salem is a registered tradename of Gerdine-Strauss LLC.

We are working to create a flourishing arts and culture center for Salem and nearby communities. Film will always be at our core but, as we are already demonstrating, we are deeply committed to other art forms including live performances and the visual arts. We are also delighted to support community service organizations and have made our space available at little or no cost to numerous nonprofits such as The House of the Seven Gables, the YMCA, The Salem Pantry, and Lifebridge.

Eventually, we will hand off operations to a new 501(c)(3) public charity.  For now, as we operate through an LLC, Marshall and Elaine do not and will not receive compensation of any kind for their services.  All funds, whether contributed by Marshall and Elaine or others, will stay with Cinema Salem and be used to improve the physical plant, cover operating deficits, and allow new creative ventures with others in the community. 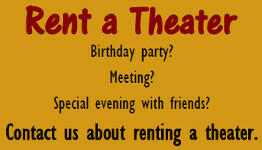